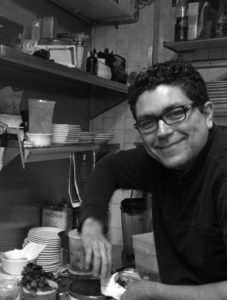 Chef Luis Arce Mota brings years of skill, experience and ambition to the kitchen of La Contenta. At La Contenta it is his goal to showcase his Mexican roots and his classical French culinary training, offering Mexican cuisine with French accents. Chef Mota’s story is archetypal, that of someone starting at the bottom and determinedly working his way up. Emigrating to the United States from Mazatlán, Mexico in the early 1990’s, Luis began his culinary career as a dishwasher in Carmine’s Restaurant in Times Square. His early exposure to and love for family cooking and traditions in Mexico primed his eagerness to learn more in New York at every opportunity.

Chef Mota’s initiative and performance were rewarded, and he gained experience in many famous Manhattan kitchens, under the tutelage of renowned chefs including Cesar Ramirez, David Bouley, Michael Lomonaco, and Michael Romano. In between stints at Bouley, Windows on the World, Union Square Café and Jefferson Restaurant, Luis received formal culinary education at the Cordon Bleu in Paris and the Culinary Institute of America in Hyde Park, New York. Read MoreRead Less

Chef Mota eventually found two partners and opened Café Condesa, a very popular and well-reviewed West Village eatery. Café Condesa was a tiny space with a smaller kitchen containing just an induction stove and convection oven; for Chef Mota these were not obstacles but creative challenges, and he succeeded brilliantly. He then moved on to Ofrenda where New Yorkers reaped the benefit of what Chef Mota can do in a real kitchen where he offered a menu rich in tradition and heritage and at the same time fun.

La Contenta is the newest development in Luis’ career as a chef-owner. In this intimate Lower East Side bistro, he presents a menu highlighting traditional Mexican ingredients while incorporating classic French techniques. Luis is joined by noted mixologist Alex Valencia who has created a robust cocktail program emphasizing agave spirits. The goal at La Contenta is to offer excellent quality at reasonable prices, with a particular focus on customer service.

In what little spare time is available to him, Luis loves to travel. He has traveled around the world and has visited all seven continents including, most recently, Antarctica. He especially enjoys scuba diving and sampling and studying the cuisines of every destination. Luis has been married for more than 30 years, and he and his wife Lisa have rescued many animals, including the parrot and turtle with which they share their home. La Contenta is Luis’ and Lisa’s homage to “Easy Rider,” the iconic 1969 road film, and the El Prado, New Mexico bar featured in its opening scene. ¡Salud! 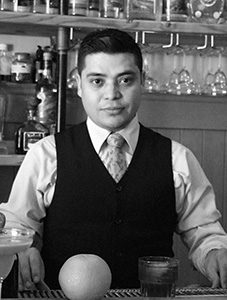 Alex Valencia began his career in the service industry in 2003, and had the opportunity to follow his true passion – mixology – three years later. In 2008, he started working alongside some of New York City’s top-rated mixologists from bars such as PDT, Little Branch, and Apotheke. During that time, Alex was able to hone his skills as well as learn and create new techniques and recipes that have become his signatures.

Alex’s limitless creativity and talent quickly garnered recognition from industry peers, local and international press, as well as extensive praise from the public. In 2008, Alex was part of the opening team of trendy Latin fusion eatery Yerba Buena in New York City’s East Village. Following the success of the first location, Alex was named head bartender and bar manager at the second Yerba Buena in the West Village, where he was tasked with creating the restaurant’s cocktail program. Alex received many accolades from publications such as The New York Times, New York Magazine, The New Yorker, and many more for his work at both Yerba Buena locations. Read MoreRead Less

In 2012, Alex began working as the head bartender at The Flatiron Room, a beautiful whisky bar with more than one thousand whiskies. Shortly thereafter, his whisky recipes were published in the book Whiskey Distilled: A Populist Guide to the Water of Life, by Heather Greene. Most recently you would have found Alex behind the bar at Bathtub Gin, a famous speakeasy located in the Chelsea neighborhood of New York City, where he proudly featured some of his newest recipes on the menu.

Aside from showcasing his masterful cocktail skills at some of the city’s leading bars and restaurants, Alex has been educating the public in the art of creating cocktails through his mixology classes since 2010, and has been a mentor to several novice bartenders. In 2011, he was nominated by a local news publication as one of New York’s best bartenders, and has won various awards at national mixology competitions over the years. Aside from his continuously growing list of awards, the most important honor for Alex is the opportunity to get to know and form lasting friendships with mixologists around the world who share his dedication to the craft.

Alex’s honest passion for cocktails guides his career and personal life, and his dream to one day open his own mixology bar has been fulfilled at La Contenta. Alex enjoys spending his leisure time cooking, dining out, and discovering new bars and restaurants, as well as devoting time to his daughters and wife of 19 years, who are his biggest fans. 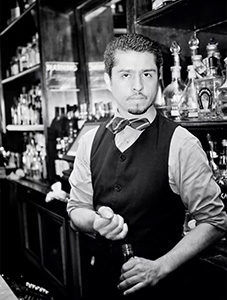 Rigoberto “Rigo” Cervantes hails from Guadalajara, Jalisco, Mexico, the birthplace of tequila. Introduced to agave spirits at a young age, Rigo and his brother discovered where his parents hid the tequila and mezcal, and tasted a little bit of everything. It was only when he moved to New York City in 2005, and started to work in the restaurant industry, that Rigo began to understand what a versatile and popular spirit tequila is. Following stints as a busboy and waiter, Rigo began working as a bar back under the tutelage of his cousin Alex Valencia and Miguel Aranda who introduced him to a new world of agave-based spirits and flavor combinations.

Rigo eventually became a bartender at Yerba Buena in the East Village where he worked for several years and fine-tuned his mixology skills. In 2015, Rigo helped to open La Contenta, the Lower East Side restaurant-bar which specializes in alternative agave spirits such as raicilla, bacanora and sotol. Rigo brings his passion and dedication to La Contenta where he works as a manager and bartender.